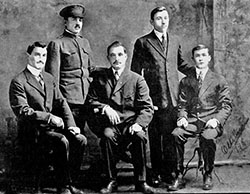 The year was 1903 and the new twentieth-century was well under way. History will long remember the period as an age of urban development and a boom in building innovations. The Montalbine family -- five brothers from Brooklyn, NY and immigrants with the desire for opportunity -- became specialists in the field of construction and foundations and established Roman Stone Construction Company.

However, the depression of the 1930’s and two world wars ultimately reshaped the business and by the 1950’s the company was taking a new direction. New York City’s large power utility, with their ever-increasing demands for new products, reached out to these experienced craftsmen with a new application for their skills. Concrete conduit became the new foundation for productivity in the company.

Soon after, it became apparent that the field of electrical construction was ideal for new development. In a decision to allow this area of expansion to mature on its own, a subsidiary company was born and the name “Kindred Concrete Products” was unanimously adopted in 1952.

Over the years, newer and better methods were explored to improve product service, quality and reliability. In 1991, a related but more diverse course was taken and “KCP,” as the company had come to be called, went into the “cast iron” business. Utilizing both foreign and domestic sources a large inventory of castings was amassed, many of which complemented existing concrete products while still others opened the doors to a much larger market. Although, throughout the years, we have outsourced castings from numerous foundries, we are proud to currently have the distinction of being named the NY distributor for US Foundry along with other foundries we distribute for.

In order to streamline operations in 1997 it was decided to unify all activities under the auspices of our parent company “Roman Stone”. Given the success we had with cast iron products, it was decided in 2009 to join force with Smith-Midland and purchase an Easi-Set license to produce J-J Hook Temporary Barrier.

Today Roman Stone Construction Co. calls Bay Shore, L.I. its home, at what has become a strategic location for serving the metropolitan area along with Westchester, Nassau and Suffolk Counties. Its 33,000 square foot manufacturing facility situated on 9 acres is dedicated to providing a full line of precast and cast iron products for the electrical and mechanical construction industry maintaining a standard of excellence that has become a symbol of quality to utility and transportation agencies alike. We are proud of the approvals that we have received from a wide variety of agencies. Just to name a few, they are as follows: NPCA, Con Edison, NYSDOT, NYCDOT, NYCDDC, NYCDEP, NCDPW, SCDPW, SCWA, MTA, NY/NJ PA, TOH, National Grid and LIPA, as well as many others. In recent years, to keep up with customer and market demands, we have taken on a complete line of cast iron (castings, frames, covers and grates) to complement our existing line of precast concrete.

Roman Stone Construction Company of Bay Shore, NY has been honored for 15 consecutive years in the National Precast Concrete Association’s plant certification program. The company was recognized for this achievement on Feb. 22 in Denver during The Precast Show 2018.